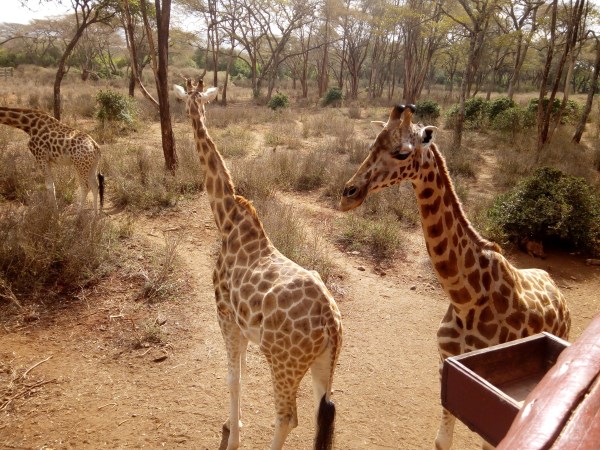 That was the first comment the gate keeper made as he saw me walking through the gates of the Giraffe Center, located in Langa’ta, approximately 5kms from Nairobi City.I smiled back in amusement; such comments are not new to me. My height has been compared to that of a giraffe since I was in Kindergarten. I remember being taller than all of my peers. The last time I visited the Giraffe Center I was just 4 years old. If my memory serves me correctly, I cried out loud as my mother carried me up on her shoulders, encouraging me to stretch out my hand and touch one of the residents there. In my defense, I think Giraffes can look very scary to a 4 year old, with their large eyes, strange Hairy horns (called Ossicones) and incredibly long tongue. I didn’t remember that visit being very successful, so it felt good being back 23 years later to give it another try. And yes, I am 27!

I climbed up the stairs of the raised observation platform with no trepidation, only excitement. The main attractions for visitors there are seeing, handling, feeding and even kissing the giraffes (yes that is a thing there). I was very excited when one of the guides gave me a handful of pellets; I was then ready to make amends for my childhood fears all those years ago. One of the giraffes stretched her neck, raised herhead and stuck out her long slimy tongue towards my hands. She was named Daisy and this was the closest I hadever been to a wild animal. I was concerned and cautious at first in case she would bite me, but after popping a few pellets into her mouth my fears dissipated and my confidence increased as I watched her eat greedily, but gently, from my hand. She was so calm and gentle with me, allowing me to reach out my hand and pat her on the head as she remained still. I am sure she enjoyed it as I saw her close her eyes, just like we humans do while receiving a relaxing head massage. She let me do this until someone else moved beside me with a fresh handful of pellets. I swear she almost winked at me as she made her move to her next new friend!

The Giraffe Center was established as a tourist destination in Nairobi 1983 by the late Jock Leslie-Melville, a Kenyan citizen of Scottish descent. He and his American wife Betty devoted their lives to protecting and breeding the Rothschild’s Giraffe species, native to East African grasslands. They started with one Giraffe calf (also named Daisy) in the 1970’s and the programme has been a success since then, resulting in the introduction of several breeding pairs into Kenyan National Parks. Sadly, Rothschild’s Giraffe remains on the endangered species list to this day, but they can be seen in the wild in both Lake Nakuru National Park in Kenya and Murchison Falls National Park in Uganda. 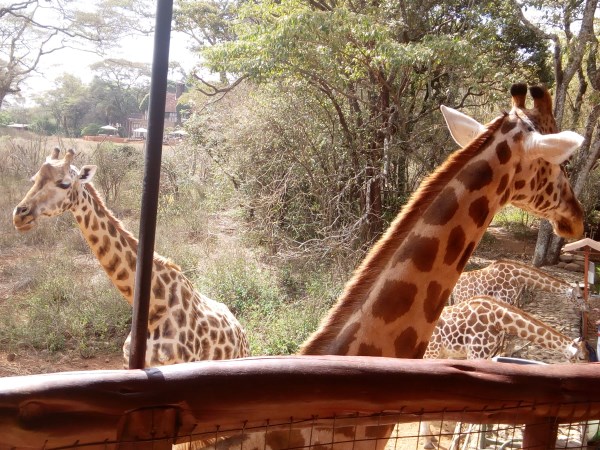 To be able to get so close to these majestic animals, feed them from your hand, look them in the eye while giving them a head rub – all while supporting the protection of the species through simply paying your entrance fee – I’d say the Giraffe Center really is a “must do” destination when visiting Nairobi.